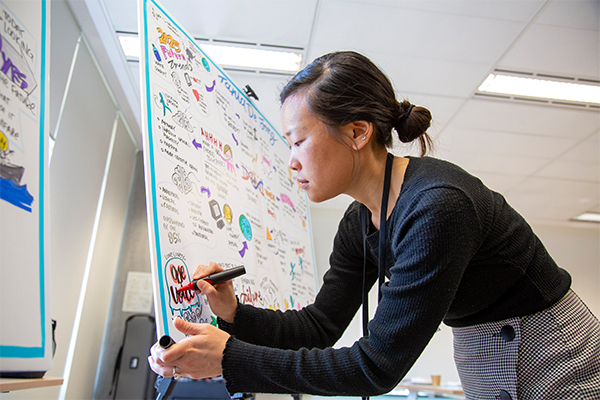 Alison was nominated for an APDG (Australian Production Design Guild) Autodesk Award for Design on a Short Film in 2013 for her Production Design work in My Mother, Her Daughter (dir. Erin Good) and as an Artist was commissioned to paint Camilla Franks Rhino for the Taronga Zoo Wild! Rhinos Art Project in 2014.

Alison has exhibited in both solo and group shows in Sydney & Melbourne over the past decade and continues to spread her wings within the film industry specialising in a range of Art Department roles on a variety of commercial & independent Film & TV projects in Sydney.

Recently joining The Visual Storytellers Group in 2019; Alison has continued evolving as an Artist & Designer working on a series of creative and innovative projects under the guidance of the groups Lead Visual Storyteller Paul Telling. These projects have provided Alison the opportunity to expand her existng skill set, learning the art of visual storytelling through live scribing, painting murals and graphic design at large conferences, workshops and events around Sydney.

“Through my art I can explore the depths of connection to both my inner and external world. Sometimes I have an intention for what I want to create, other times I let my creations take me on a journey of their own.”